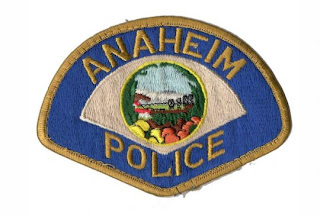 In the early hours of the morning, Anaheim Police and Federal agents descended upon a number of gang-controlled areas, including the neighborhood in Central Anaheim that has long been infested by the Eastside Gang. Yep, that would be the same Anna Drive / Acacia Street area that has been in the news lately. It seems the cops had very good reason to suspect that some men were into illegal activity and were worth questioning. That suspicion appears to have less to do with racial profiling, and everything to do with the fact that law enforcement has been watching the gang in that area for roughly a year! Those cops knew who was dealing drugs, who was dealing guns, who needed to be questioned, and frankly, who to fear might be carrying a gun. In fact, the OC Register reports   that "Among the mugshots of suspects displayed at the news conference was one of Manuel Diaz. His death July 21 was the first of two back-to-back police shootings last month that touched off nights of protest."

The LA Times reports that "FBI crime statistics show that after several years of decline, violent crimes in Anaheim increased 10% last year, going from 1,161 to 1,281; murders nearly doubled, from 7 to 15. The increase went against a national trend that saw a 4% decrease in violent crime.
Anaheim police say they are seeing an uptick in gang crimes with guns, which could be a factor in an increase in deadly confrontations involving officers. Police have fatally shot five people in the city this year. "
The Times goes on to quote Anaheim Police Sgt. Bob Dunn, saying, "The gang crime involving guns is up 40%. The number of guns taken from gang members is up 233%," Dunn said. "The gang crime is up, but importantly, it is the amount of guns from gangs we're seeing."
Following the initial officer-involved shootings in late July, KFI's Steve Gregory pulled records from the Anaheim Police files, from which he reported on the Bill Carroll show that over 900 calls for service were made in the last year for the Anna Drive area, 69.9% of those calls were complaints and tips from local residents. Clearly the people living in that area are desperate to have the gangs cleaned up, although I am sure they would prefer that the gangs not know that they want them gone!
While I am no apologist for the APD, and I have had my fill of some arrogant behavior from some on the force, I have to applaud the Chief for his discretion and professionalism in handling the recent protests. It could not be easy to stand there, attacked on national television, knowing the criminal back-story of that area and some of the people involved.
Meanwhile, a gang member was reportedly shot by members of an opposing gang on Wednesday night, while walking along  Sycamore Street near State College.  No reports have surfaced regarding angry residents protesting, looting, or rioting in response this gang-on-gang violence. News cameras are not blocking traffic on Sycamore Street seeking to interview community leaders' reactions to the shooting, and Anonymous and OccupyLA have not yet released their press statements on the event. We will keep our readers updated regarding any lawsuit filed by family members against the gang purported to be responsible for the shooting, and of course we will share the many youtube files sure to be uploaded showing the heinous shooting. Go ahead, hold your breath for that.
Meanwhile, as national media picks up the news that was included in a press event this morning, the APD site for Press Releases does not appear to have been updated since 2011,
and there is no mention of this victory for law-abiding citizens on the official Anaheim.net  page for "News in Anaheim" either, which was last updated on August 1st. While Anaheim's Police Chief is doing a great job of trying to clean up challenging areas under overwhelming odds, it seems we have a long way to go in the "official" education of our citizenry.

It's encouraging to see the Anaheim Police department curb gang control. Thanks for keeping our cities safe.

There has been high demand forindustrial plastics in Anaheim. Any suggestions on how to keep up with the supply and demand?