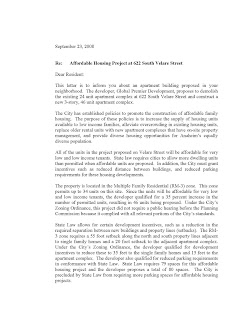 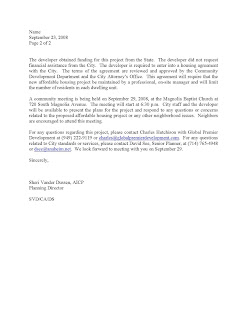 Sheri Vander Dussen at the City of Anaheim's Planning Department has been inviting the locals to attend a meeting on September 29 to review a new housing project for 622 S. Velare. The existing complex, built in 1961 and sold in February 2007 for $4,500,000. will be demolished, and a new complex built in its place. Because the new complex is slated as affordable housing, the density bonuses allow the developer to nearly double to number of units on the property. Local reports tell of a three story building, with a setback variance granted (State Law allows it) so the building will essentially dwarf the single story residences in the area. I have not seen the plans to confirm that report, but I would encourage anyone interested to attend the meeting scheduled for September 29, 2008, at the Magnolia Baptist Church at 720 South Magnolia Avenue. The meeting will start at 6:30 p.m. City staff and the developer will be available to present the plans for the project and respond to any questions or concerns related to the proposed affordable housing project or any other neighborhood issues.
Posted by colony rabble at 5:37 PM