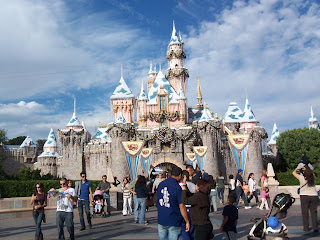 Took a day off from the battle against ovarian cancer to goof with the kids at the House of Mouse. Richard and I have long talked about those Annual Passes, and then we cheap out and don't do it. But it is time, the restorative powers of the Happiest Place on Earth were beyond compare, and especially now that our brilliant leader Ahnold wants to tax Dland tix to the tune of nearly 10%, we figure we better grab those passes now. Yes, the new Sleeping Beauty visuals meet the Disney hype. But some areas bottle neck and we found ourselves essentially trapped in the castle, unable to move forward or back. Just avoid anyone who had the garlic shrimp last night and you're fine.

Candelight was, as always, unbelievably beautiful, it touches my soul like no church service. I had read on some blogs that you can buy dinner passes to the event, but they are pricey and sell out immediately. I'll let y'all in on the dirty little secret. I have attended Candlelight for several years now, and I have yet to buy a ticket. How? VOLUNTEER! Candlelight was intended by Walt to be a thank you to the community. While there may be a few people there who may have bought tickets, I would say the overwhelming number of people I see are the same people I run into at the community events. They are the people who volunteer as City Commissioners, or Board of Directors for local non-profits. Put in some time, make your world a better place, and let Walt's people say "thank you" at Christmastime. Not sure where to put in your time? Give me a holler, I have a huge list of ways you can help Anaheim.

Posted by colony rabble at 2:22 PM