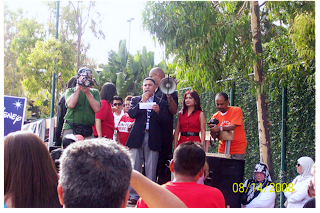 Today's image is our own Lorri Galloway, not only attending, but clearly leading, a Union protest at Disneyland that disrupted the vacations of our beloved TOT paying visitors, whose vacations help pay for the salaries of the firefighters who helped Re-Elect Lorri (talk about turning yourself into butter). The image is posted in "celebration" of today's swearing in ceremony, which Ms. Galloway insisted on moving to the Heritage Forum so her friends could all attend. Look carefully at the faces of these union leaders, they are certain to be at the party tonight! Sour grapes? Oh yeah, as sour as they get. But not for the reasons you are thinking. If I believed for a second that the people of Anaheim had a grasp of the very real issues that our City faces, if I believed for a second that the people of Anaheim truly understood who Lorri Galloway is and what she stands for, and that 22.6% of my neighbors wanted her to represent them, I would bow to that decision. But the reality is, many of the people who pride themselves on voting in every election do not bother to examine the issues, or the candidates, before casting that vote. Example: Jennifer Rivera, an unknown candidate who never filed a candidate's statement and ran no campaign, did not attend any candidate's forums, and never even posted a website, picked up 8,208 votes! How? She was the first name listed on the ballot-and voters were overheard at the polls admitting they simply picked her because she was first and they wanted to get home. So today I share this photo in one last scream of election futility. When voters were presented with this photo, Lorri lost votes. Sadly, the mainstream press, even the ones who bothered to cover the Union protest, never mentioned the presence of Lorri Galloway, so the exposure of this info was limited to a few political blogs. Thanks guys!

While I am the first to admit my viewpoints may be those of a bitter old (Forty-something) woman, a recent study http://www.americancivicliteracy.org/ shows that more people know that Paula Abdul is a judge on American Idol than understand the origins of the Gettysburg Address.

So what is the answer to increasing, oh lets be nice and call it "voter awareness'? One friend suggests sending voter instructions as a type of scavenger hunt. If you are smart enough to unravel the clues and find your polling place, you are smart enough to vote. I like it. At the very least, I think each and every one of us should be required to pass the same Citizenship test required of immigrants. Just for fun, see if you can pass it. http://www.msnbc.msn.com/id/13442226/ Then tell me, what are your theories for keeping the "eenie-meenie-minie-moe" voters from spoiling it for the rest of us? Discuss among yourselves.

Posted by colony rabble at 8:29 AM