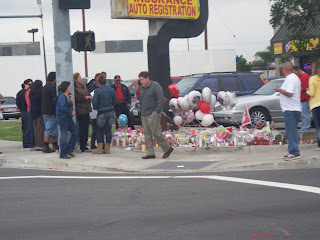 This location is Fullerton, but the story is all Anaheim. The corner of Lemon and Orangethorpe has become the site of a memorial to the 3 young people killed by what appears to be a drunk driver. Angels pitcher Nick Adenhart was celebrating his new career in Major League Baseball, after flying his parents in to see him pitch 6 scoreless innings in his Season debut. Nick's girlfriend, Courtney Stewart, was driving, and friends Henry Pearson and John Wilhite were passengers. At the corner of Lemon and Orangethorpe, Andrew Gallo, a 22 year old driving on a suspended license for prior drunk driving convictions, hit the car the young people were in, while apparently drunk yet again. 3 of those people are dead, and Wilhite, a ball player at CSUF, has just been taken off the critical list, so hopefully he will make it. 3 young lives taken by the stupidity of one person. This is one of those "screaming at the sky asking God what he is doing" moments. The Angels postponed the game scheduled for the evening the group died, and held a moment of silence during the next game. Note to the press: Could you maybe just call them "the Angels"? I know Arte won the right to call them the Los Angeles Angels of Anaheim, but frankly it is just beyond stupid.
Posted by colony rabble at 7:58 AM