Anaheim has long been Halloween-happy, and I am glad to report the town is returning to its old celebrations. Now before you get in a wad over the Christianity vs. Halloween debate, allow me to give some background. 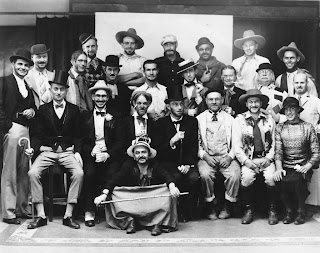 In the 1920s, the KKK, posing as a men's Bible Study, managed to infiltrate Anaheim, taking a City Council majority, and controlling both the Police and Fire Departments. (It's OK, we did throw them out)Some of our civic leaders were not as easily deceived by the masses, and Lotus Loudon, Publisher of the local newspaper, created a Halloween celebration as "a better use for a bedsheet". Storefronts were decorated by local schoolkids, with awards for the winners, which brought shoppers downtown to look at the windows. A kiddie parade in the daytime was followed by an adult parade at night, which involved literally every civic group in town. To not have your group represented with a float was unheard of, and in some circles, downright unpatriotic. The culmination of the festivities was the Masquerade Ball, which was the social occasion of the year. Sadly, our misguided leaders of past regimes bulldozed the downtown that the parade ran through, which pretty much took the party out of it all. Thankfully, folks like the Fall Festival Committee have been working hard to bring back the Parade and Ball. This year's theme was Return to Oz, and the Masquerade Ball featured awards given to those community members showing Brains, Courage, and Heart. Winners were:

Glad to see our civic spirit returning to Anaheim! I have to serve one more year of indentured servitude to Mr. Schroeder's Loara Band Tournament that same weekend, and then I can participate too! Congrats to the winners, and thanks to the Fall Festival Committee for all your hard work, often against overwhelming odds.
Posted by colony rabble at 3:47 PM