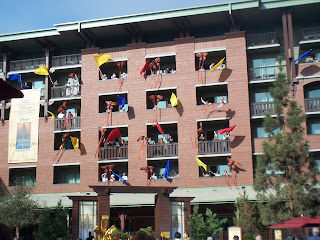 Sarah Tully reports in her "Around Disney" blog (see link above) that despite Disney's overwhelming efforts to curb the spread of flu in the Resort, there are still members of the Unite Here Labor Union that are undermining their efforts by deliberately coming to work knowing they are sick! Their selfish excuse? Their own Union cancelled their sick pay benefits to save money during a dispute over their contract with Disney. That's right, Disney did not cancel the sick pay, the Union did! How is it that 30 other Unions have accepted the new contract from Disney, which I understand gives them greatly expanded benefits, but the Unite Here Union has refused to even meet with Disney to further discuss the issues. The Union's position seems to be "Our Way or the Highway". Sorry Ada Briseno, but this is still the United States, and business owners still have the right to make their own best offer, YOU take it or leave it. As far as those employees that knowingly work when sick, I think they not only should be fired, I think they should lose their Safety and Sanitation certificates, preventing them from working with food in the future. Fire them, Mickey! If the goal of the Union in releasing this information to Sarah Tully was to scare off guests, it didn't work. I was just there today, the place is jumping, and folks are stopping to use the hand sanitizer stations, expressing gratitude to The Mouse for caring about their guests and Cast Members. In case you were wondering, today's Register reports that Knott's is doing NOTHING different in their handling of a public venue during a flu outbreak. Somebody hand me a churro.
Posted by colony rabble at 1:26 PM