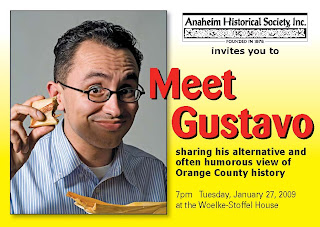 Today's thought is from "An Incomplete Education" by Judy Jones and William Wilson.

"Gosh, so much has happened over the years. Wars and revolutions, edicts and referendums, dynasties and one-night stands, rebuffs and embraces. You'd think we'd have learned something from the whole business by now; after all, as the turn-of-the-century Harvard philosopher George Santayana admonished, "Those who cannot remember the past are condemned to repeat it." But how do you decide whose version of things you are going to buy? Well, you should begin by realizing that there's history, (or more formally, historiography) which is the writing down of everything that ever happened, and then there's the philosophy of history, which attempts to say what, exactly, that act of writing down accomplishes, and/or where eventually, the historical process itself leads; and that most "historians" do one or the other, although some wind up doing both. Beyond that, don't look at us: We've just examined everybody's celebrated account of one or more of the world's great moments and it seems perfectly obvious that everybody's lying."

On that note, the Euro-centric Anaheim Historical Society has invited Gustavo Arellano to speak at the January General Membership meeting, and share his alternative view of Orange County history. It should prove to be a very interesting evening. Y'all might consider attending, the public is invited and admission is FREE.

Woelke-Stoffel House (you probably call it the Red Cross House)

Posted by colony rabble at 4:54 PM No comments:

Happy New Year. While many of us make our resolutions, life has hit me with more introspective soul searching opportunities than usual for this New Year. Back in October I honestly could not conceive of anything more depressing than Galloway's re-election. 2 days after the election we took my beloved Mother in Law to the hospital and I got hit with stuff that made local politics seem petty and immaterial. I had 6 weeks of watching one of my best loved friends die a quiet, dignified death, and it completely retooled the way I think about life. We buried her on the 27th, laid her beside her beloved Stanley for their Anniversary. And on Monday the 5th I went in for surgery myself, stuff I should have done in November, but put off (foolishly but no choice) to care for Mom. Complications arose, and I found myself spending the night on the 5th floor where I had just been with Mom, being cared for by the same nursing staff. Now I am stuck on a month's leave from work, unable to do anything but stare at the ceiling, read, and blog. Lucky you.

So now I find myself at a cross roads. I am in this odd place where I can at long last do absolutely anything I want to do with my life. Anything. Go back to school, start a whole new career, or pull up stakes and move altogether to a neighborhood I could never afford before. And it is kind of scary. Because now suddenly I have to figure out what I want to be when I grow up, and I realize I have very little idea of what that looks like. I know I want to finally finish my house. And spend time trying to help my family heal the hole in their hearts where "Grammie" used to be. Otherwise, no clue. Suggestions welcome.

I will admit that one of the thoughts bouncing through my noggin was to leave. I am tired of the boom boxes outside my bedroom window, tired of the shopping carts on the lawn, and the drug dealing dirtbag next door. And after that last election, I do not see it getting better, at least not while we have elected a City Council that insists on gearing our community to the least common denominator of poverty. Driving through neighborhoods I always admired (Hillcrest anyone?) and knowing I could buy one of those made it seem pretty good. Nah, Fullerton does not have a Mills Act program, and I am too cheap to pay full tax. But I was flirting with it.

So what changed my mind?

I realized I made a difference. The jerk next door who has been making life miserable with his drug dealing buddies using my corner of the world as a sales office came over. He apologized. His Mom got sick, and he needs to take care of her, realized he could not do that with his lifestyle getting in the way. So he dumped them. And as he saw the street return to some semblance of "normal", he realized he had been hurting us. He came over to say that he knew how hard Richard and I have been working to rally the neighbors and make things better and he had hurt that effort with his selfish action. He promised to work with me in the future to make this a place where his Mom could be proud to live.

So yes, I can run off to some quiet rural cul de sac where the biggest problem is folks not cleaning up after their horses. And I would go stark raving mad. Because in the end, I need to make a difference. At the end of my life, I want to point to my corner of the world and say I made it better. And for now that corner remains Wilhelmina and Lemon. God knows what the rest of the plan looks like, but I have a whole entire month to sit quietly and let Him tell what the plan is.
Posted by colony rabble at 10:14 AM 2 comments: