Leadership Hoax and the Real Deal All in the Same Week

The Hoax:
Okay, so the link to Anaheim is a little iffy, but roll with me here. A young film-maker named Daniel-Califf-Glick contacted me with an invite for local history junkies to come see his new film, "The Triumph Of William Henry Harrison", playing Thursday, August 27th at the IndieFest here in Anaheim. His thought was that history nerds tend to love all history, not just local stuff, and I think he's right. Now keep in mind the film is a "mockumentary", based on "conspiracy theories" surrounding the death of Harrison. So the thing is gonna be really amusing, or really bad, there is rarely a middle ground here. But I love the enthusiasm of a young film-maker who pulls out all the stops and calls and emails around to gin up support for his project. So Richard and I are going, and invite others to join us. The theatre is at Downtown Disney (get your parking validated at the theatre, the Mouse values their parking spaces). 7 pm August 27.

For the Real Deal:
In other news that is actually connected to Anaheim, the Chamber of Commerce contract comes up for renewal and negotiation with City Council on Tuesday, August 25, at a meeting that starts at 5 pm sharp. The Chamber has a contract to host special events that promote Anaheim business, and the contract runs fiscal year to year. That makes advance planning difficult for long term goals, which is not an efficient use of resources. They are instead asking for a 3 year contract, which makes much more sense in a tight economy, if anything we do not have to pay for staff reports every year to review a contract that has been great for everyone involved. Todd Ament has brought new life to a Chamber that had been stuffy and innefficient at best, and I would follow them into battle any day under Todd's leadership. The Chamber has elevated events like Taste of Anaheim to new highs, and promoted all sorts of business networking and information programs that include all walks of Anaheim citizens. If you agree, and would like to show support, please attend the Council meeting in Council Chambers, City Hall, 200 S. Anaheim Blvd, at 5 pm. You need not speak if you are not comfortable, at some point someone will ask for a show of support, and you may simply stand to let Council know you support the Chamber's new contract.
Posted by colony rabble at 7:34 AM 1 comment:

Events at the GardenWalk 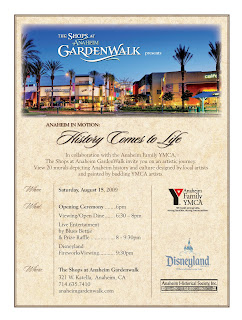 The Anaheim GardenWalk is inviting the public to participate in the Unveiling Ceremony of "Anaheim in Motion: History Comes to Life" on Saturday, August 15, beginning at 6 pm. Anaheim Planning intern Janet Lee, working as an unpaid volunteer (God bless her) has worked miracles, coordinating 20 artists, who worked with hundreds of kids at YMCA, Boys and Girls Club, Cops 4 Kids, to create giant murals of Anaheim history and culture. The project, sponsored by the Anaheim Historical Society, Assistance League, and many other non-profits and for-profit businesses, will display the murals as public art for roughly a year, in space generously donated by the Anaheim GardenWalk, in the Anaheim Resort. The family friendly event will include magic shows for the kids, and the best view of the Disneyland fireworks outside of the park itself. The event is FREE and open to the public. GardenWalk is located on Katella, between Anaheim Blvd and Harbor, east of Disneyland.
In other GardenWalk news, Richard and I joined some Colony neighbors last weekend for Julie and Julia, and of course the ONLY civilized venue for a great movie experience is the GardenWalk theatre. The theatre is split into 2 sides, one for families, and a 21 and over space, where the snack stand features beer and wine, which may be imbibed in the theatre. Nice step up from popcorn and overpriced soda, eh? All seats in the theatre are luxury leather "media room" type recliners, and the absence of the under 21 set and their incessant text messaging makes the $11 ticket price a bargain to me and mine! As far as the movie, Julie and Julia was quite possibly the best warm-fuzzy-feel-good we have enjoyed in years! Richard and I both agreed we need to go back and see it again! I double dog dare you to see this movie without feeling fabulous about life afterward, and I especially dare you to see it and not want to cook later! Now if I can just get Richard to stop serving everything in clarified butter before my hips explode.....
For more info on the Shops at GardenWalk or the Theatres, see their website at www.gardenwalk.com
Posted by colony rabble at 10:38 AM 1 comment: