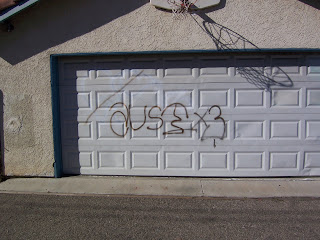 A very special thanks to William "Uncle Bill" Taormina, and Jerry Zomorodian, who are living proof that Anaheim businesses give back to the community! This just in from Keith Olesen, source of all wise and worldly info:
"As many of you know already the city, through Chief Welter and the APD, is holding a series of meetings with city managers and staff, residents, business owners, the police, and others to address the growing problem of graffiti. It was announced at the meeting yesterday by Bill Taormina, through his Clean City company, that for 60 days a portion of the downtown area will be the test site for a graffiti removal program. The area covered is bordered by Vermont on the south, Cypress on the north, East on the east, and Harbor on the west. Clean City will be responsible for graffiti removal in that area. Their goal is to have graffiti removed within 4 hours of their crew spotting it. We'll have more specific details before the start date next month regarding phone numbers for reporting graffiti and so forth, but the basic idea is that the 2 man crew will work in 2 four hour blocks each day Monday thru Friday. The morning will start by picking up graffiti locations reported and will immediately start paining over it (during this pilot program the Clean City crew will paint out graffiti, the city will still be responsible for locations that require sand blasting). The second 4 hours will be spent getting newly reported locations and painting out unreported graffiti that they spot. It's a test to see the feasibility of outsourcing some of the city's graffiti removal efforts and to try out some new ideas with regard to reporting, tracking, and removing graffiti. Clean City will make available all their data at the end of the program. Here's the amazing part: this is being done at no charge to city. Clean City purchased and outfitted a new truck (it's bright yellow so it isn't hard to spot) and is paying the 2 man crew to try this out. At the end of the meeting Jerry Zimordian (who owns the Arco station at Broadway and Anaheim Blvd and "Jerry's Corner" where Cafe Contigo is) stepped up and said he would supply all the gas for the truck during the 60 day pilot program. It's a seemingly neve! r ending problem and it's good to see some innovative thinking going into addressing it. More info as it becomes available. Keith"
Posted by colony rabble at 11:47 AM