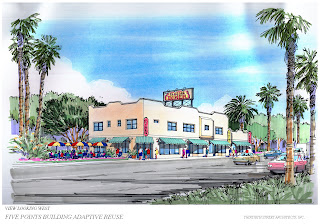 Anaheim residents no longer have to leave the city in order to shooby dooby down to Ruby's! Our own 5 Points Ruby's is now open. Yes, I know, it seemed like a fairy tale at times, as the poor old flatiron building sat on blocks for years, trapped in a sea of red tape. But Bill Taormina managed to push his way through the obstacles (including piles of money to be spent) and got 'er done! The building, originally constructed in the 1920s in a flatiron style, was crafted to accomodate the pie wedge lot left by the 5 sided intersection of Lincoln (Old County Road at the time) Center, and West Streets. Over time the building, and its surrounding area, faced challenges, as the upper floor units became flophouse style apartments, with all the joys of humanity that come with that environment. The City of Anaheim bought the building, along with the Lund Paints building next door (reused as a restaurant supply warehouse) and the surrounding homes facing south into Center Street, during a road widening project on Lincoln. All were meant for demolition, until local preservationists stepped in. The Lund Paint building was lost, but the residences were moved to other lots on the street, and joined by infill new construction, in styles that reflect the neighborhood. The Flatiron would have been a total loss if not for developer Bill Taormina, who stepped in knowing the the investmen was unlikely to pencil out. Bill rehabbed the building, and in a departure from the usual red and white 50s style Ruby's theme, the 5 Points Ruby's sports a brown  and tan theme that reflects eras from the 20 to the 40s, more in keeping with the structure's period of significance. Photos from the Anaheim History Room's Digital Collection grace the walls, reflecting Anaheim's past. Carhops on skates serve drivers beneath a massive pergola, and the outdoor patio area looks like the perfect spot for Saturday breakfast! A public park is planned for the remaining corner lot.

The restaurant has been serving invited guests during a "soft opening" combining fund raising for local charities with training new hires to serve the public. I attended one of the fundraisers Friday night with Council candidate Kris Murray, Disney's Carrie Nocella, School Board Trustee Jordan Brandman, and our families, in a completely packed house! The Morris family directly across the street were in attendance Friday night, clearly excited to see this finally come to fruition, after years of living in a construction zone! Also residing across the street is larry Black, who has been to Ruby's repeatedly, not only for the excitement, but likely to keep his kitchen clean so he can sell the airplane bungalow his family has on the market.www.CalBungalow. com.

Come on out to see the latest Ruby's, at Lincoln and the 5 freeway (across from Paul Kott's office) and if you run into Bill Taormina, say thanks!

Speaking of Jordan Brandman, his re-election Kick-Off party is tonight at Mama Cozza's restaurant, Ball and Brookhurst. I undertand there are about 100 guests planning to attend, but there is always room for more. You can pay at the door if you can make it last minute!
Posted by colony rabble at 8:37 AM